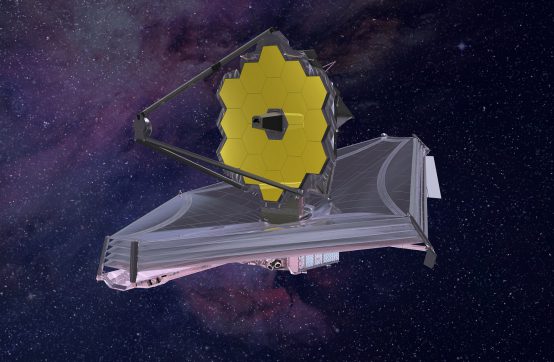 For: Teachers/Parents For: Youth

The James Webb Space Telescope and it's Canadian Connections

Since its launch on December 25, 2021, the James Webb Space Telescope (JWST) has been holding the attention of scientists, students, and space enthusiasts alike. Notably, Canadian researchers, engineers, and astronomers played a critical role in this $10-billion, 25-year-planned, tennis-court-sized telescope that is providing new and incredible views of our universe.

JWST looks out into the universe in wavelengths that our eyes cannot see. It is an infrared telescope, looking at the heat coming off some of the oldest and most distant objects in the universe, as well as the infrared radiation from neighbouring planets and nearby regions of star formation. The telescope is huge – its mirror is 18 hexagonal segments with an overall diameter of 6.5 meters. As well, its instruments must be kept very cold, approximately -230 C, for them to see the oldest and most distant objects in the universe. To protect its instruments from the heat of the sun, there is a sun shield that consists of 5 thin layers and is approximately the size of a tennis court. It had to be perfectly folded to fit in the rocket for launch, and then needed to unfold itself after launch in space. The side of the sunshield that faces the sun heats up to approximately 85 C, whereas the side with the instruments on the cold side of the sunshield is roughly -230 C!

The Fine Guidance Sensor is the component that allows JWST to stay perfectly pointed at exactly the place it is supposed to look. Without this guidance sensor, JWST would not be able to be still while pointing in a location – all of the stars and objects in the image would be blurred from movement!

NIRISS is an acronym for the Near Infrared Imager and Slitless Spectrograph. This instrument allows scientists to take images in infrared wavelengths and its special purpose is to split the light from all objects in an image into tiny rainbows of light – spectra. The full spectrum of light of an object allows us to learn about the chemical elements that make up the objects we’re viewing. For example, if JWST is peering into the atmosphere of an exoplanet, we would study the atmosphere’s spectra to learn what elements are in that atmosphere. Here on Earth, our atmosphere has oxygen that we breath – but those oxygen molecules in the air would react with other molecules in the atmosphere and be depleted if they weren’t frequently regenerated by plants and algae here on Earth. If we see oxygen in the atmospheres of distant planets, there might be life there! In the atmosphere of the exoplanet WASP-96 b – a hot gas giant like Jupiter, but very close to its host star – we can see the molecular fingerprint of water, so there are likely clouds in this planet’s atmosphere.

There are many Canadian scientists, researchers, and students carefully looking over new images and data from JWST, and there are new and beautiful images being shared frequently!

At Saint Mary’s University in Halifax Nova Scotia, Dr. Marcin Sawicki is part of a team of researchers carefully looking over the data from JWST. They have recently published an article1 about a galaxy that they call the “Sparkler” galaxy – a large, distant galaxy that we are seeing when the universe was only 4.5 billion years old, or about a third of its current age. Incredibly, they’ve found globular clusters around this galaxy – and these globular clusters look like small sparkles around the galaxy. In our own Milky Way Galaxy, we have roughly 150 globular clusters – clusters of hundreds of thousands of stars, tightly packed together like a ball of stars. These clusters are tricky to study because they’re very, very old objects – generally around 12-13 billion years old, and it is difficult to precisely measure their ages. When we are looking at globular clusters from when the universe was only 4.5 billion years old, it is much easier to estimate their specific ages because it is generally easier to be more precise about an age with a younger object.

In exchange for Canada’s important instruments, which cost roughly $200 million dollars for Canada to contribute (roughly 2% of the overall cost of JWST), Canadian researchers are guaranteed to have at least 5% of the total observing time on JWST’s instruments. There are many programs that Canadian scientists will lead and these are summarized on the Canadian Space Agency’s website.2

Given the incredible images that have already been produced with JWST and its expected operating lifetime of about 10 years (hopefully more3!), there will be much more wonder, inspiration, knowledge, and discoveries to come.

I encourage all readers to follow along with JWST’s journey and newly-released images, available to the public on the Webb Space Telescope website.4